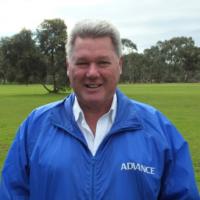 I joined the club early in 1977, just a couple of months after it started.  At that time I had Trapper, my first golden retriever.  Not long after that Mercury, another golden came along.  In the beginning Trapper was my obedience dog while Mercury competed in conformation shows.  By the time Trapper got his CDX title I had started to train Mercury as well.  He had done very well during his show career but for various reasons I decided to concentrate on obedience.  Over the next few years Mercury and I had a lot of fun trialing and along the way he got his UD title and won a State Championship in that class.
As time went by and Mercury was getting to the end of his trialing days I decided to have a go at judging, eventually gaining my full panel licence.  Since then I have had limited opportunity to trial much, but I managed to get a few titles with my german shepherds Tyson, then Satch.  Satch was a pretty good all rounder, gaining his conformation Champion title, his CDX in Obedience and Novice titles in Agility & Jumping.  I now have another shepherd, Judd, who unfortunately hasn't had the opportunity to trial much because of my judging and other commitments.
Over the past 43 years or so I have served in every position on the club's Committee except Treasurer.  For most of that time it has been a pleasure and allowed me to meet and get to know a lot of people and make some very good friends.  We are not a big club but we have always taken pride in our achievements and the value we add to our community by helping people to train their dogs to an acceptable standard.